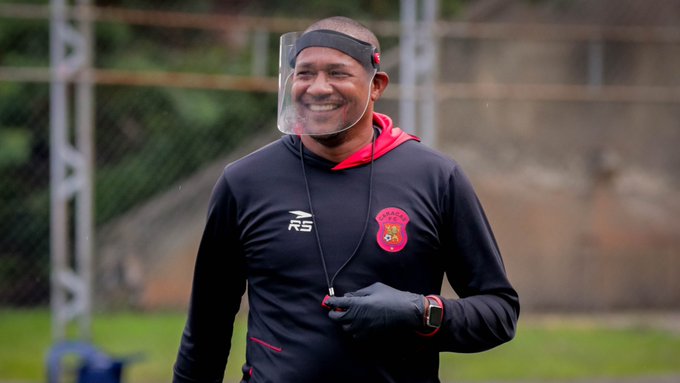 The first victory of Caracas in the hexagonal A of the Liga Futve confirmed all the omens about the steamroller in which Noel Sanvicente's team has become.

Synchronized to play one touch and take the ball to the rival field with a speed that is rarely seen in parsimonious Venezuelan soccer; the reds are an accordion that stretches and shrinks with a diamond tuning.

The dizzying pace that Caracas imposes is possible due to the technical quality and physical power of its advanced men. The Africans Osei Bonsu and Samson Akinyoola left their asperities behind to face the goal and define.

The former featured a display of ball-oriented control and a surgical cross shot with a compass on the boot to direct the ball at an angle impossible for the goalkeeper to cover.

That first goal was possible due to the dynamics that Manuel Sulbarán established with a great understanding of the game, who was not burdened by the responsibility of distributing the ball.

The youth showed maturity and great intelligence to manage the game times. He knew from the first minute what had to be done on the pitch.

He took full advantage of the depth offered by the African couple to attack the spaces and put a gourmet pass, three Michelin stars, for Bonsu to savor.

From that goal, Caracas established absolute dominance, devastating, thanks to the partnership that Sulbarán established with Richard Celis, Akinyoola and Bonsu.

The latter was, in addition, a marvel to retreat in the defensive transitions, cover his band and recover balls for the formidable counterattacks of the red box.

Akinyoola's double was a reflection of the abysmal superiority that Caracas had in the middle of the field. Every time the Sanvicente team recovered the procession, the ball passed through Sulbarán's booty so that Celis threw his devilish diagonals, such as the one that led to his shot half covered by the goalkeeper and the crossbar, which Akinyoola sent to the back with great intuition to accompany the play until the last minute.

The worked ability developed by Akinyoola in this semester to define without haste was evident in his second goal, finishing with exquisiteness without giving the goalkeeper time to take the step forward, as the old manuals command.

Celis has benefited the most from the presence of the Africans in the capital attack, and Onsu served him the fourth goal in a give and take action of pure automatism. Playing like this, it will be very difficult for Caracas to be left out of the final.