Bencomo Jr .: I feel better than ever and ready for the season

The 2019-2020 season was an atypical year for Omar Bencomo Jr. After that fateful incident in which his house in Venezuela burned in flames, in which his health was seriously compromised, his performance with the Margarita Braves was not the same one that the Venezuelan has accustomed to the island fans.

Now the story is another. The once-six-game winner in the 18-19 contest, he's ready to turn the page and be his old pitcher again.

"It's been quite a long recovery," Bencomo said from the other end of the phone. “The incident left a lot of consequences, especially in my lungs. Thank God I have been able to work on that and all this year I have been preparing for this season "

Bencomo Jr., who in the 2018-2019 contest fought for the Pitcher of the Year award, had a past year to forget. In nine appearances with the Margarita team, he barely managed one win over six setbacks for an ERA of 9.00 points; so your biggest wish now is to reverse those negative numbers.

“Last season was an unusual year for me. I have no excuses, "said the right. “Now I want to move on. For those who thought my career was over, I tell you that now I feel better than ever and I'm ready for the season

After knowing that the 2020-2021 season will begin this Friday the 27th, almost all the teams have started their training sessions; however, Bravos de Margarita is the only one who has not made an official statement on when they will begin to warm up.

Now, Bencomo Jr. has been given the task of serving as a team captain, taking charge of calling his teammates and finding a way to train together.

“They haven't told us anything about it yet. But the most important thing now is to stay united and prepared for what is to come. There are 6 of us who are training together and waiting for the call. We must arrive ready " 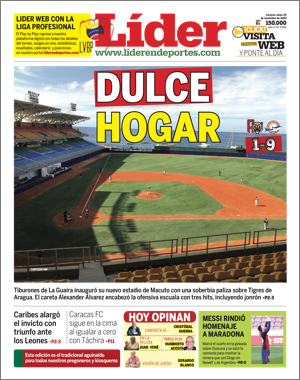