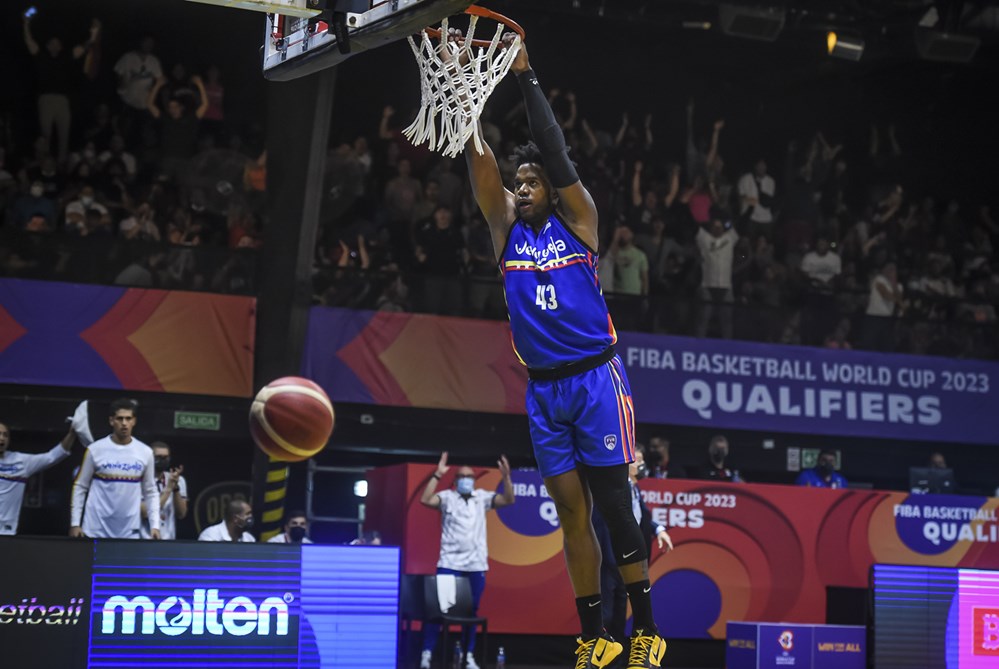 Venezuela closed the first qualifying window for the 2023 Basketball World Cup with a favorable balance in all aspects of the game. He added four points to lead Group A for the double victory against Panama, which he again surpassed on Saturday by a score of 71-53, showed a diversity of resources to attack the basket, defended with intensity, solvency and neatness to maintain the advantage, and the new troops summoned by coach Fernando Duró responded with criteria and points.

Even in the design of the uniform with a television blue, the stripes of the flag and the 8 stars bordering the chest and the sides of the team's jersey, the Venezuelan Basketball Federation scored a triumph in terms of good taste, respect and harmonious use of national symbols.

The second victory on Saturday was built in other ways than on Friday, in which David Cubillán commanded the long-distance bombardment with 100% effectiveness in the four three-point throws he hit in the first quarter.

In the first match, Venezuela scored 9 of 11 feature-length shots in the first 20 minutes, through the pulse of Cubillán surgeon, Jhornan Zamora and Pedro Chourio. The Spartans forward scored one of them from midfield, the Stephen Curry, adding to the insurmountable advantage of 18 points (47-29) that the national team retained for the rest of the game on the basis of its applied defense.

Strength on the boards

In the absence of success in the perimeter game, with Cubillán, Chourio, Zamora and Garly Sojo failing all four attempts, the national team used other resources on Saturday. He appealed to the strength of Néstor Colmenares to score six points from the paint, including a superb dunk after a robbery; and to the defense of Chourio and Sojo to intercept passes and add points in counterattack for a first quarter of 21-9 that gave tranquility for the rest of the game.

The lowest percentage of success from the border was repeated in the second quarter. Cold at few times, Chourio needed five attempts to convert his first triple that was added to another long-distance basket by Colmenares, to the points in the low post of Edgar Martínez and Colmenares himself to establish the equalized 15 points that they left the half time in favor 36-24.

The finesthat had been scarce in the first two quarters appeared in the third by the hand of Chourio, Sojo and Cubillán. They made three hits, while Colmenares, Zamora and Miguel Ruiz scored another six points in the painted area to win the third quarter 18-13 (54-37). The cherry on top of the victory was placed by triples by Chourio and Sojo in the last quarter in which José Ascanio and Ányelo Cisneros contributed baskets as soon as they entered the court.

Solidarity to distribute the ball

The first window of the World Cup showed a very applied Venezuela to execute the game plan conceived by Duró, both in attack and defense. He exhibited good shooters to shoot three-pointers at Cubillán, Chourio and Sojo, and a tight defense to swap marks, help on the weak side, prevent comfortable shots and steal balls that served to reduce the Panamanian attack to 54 points per game.

In addition, the solidarity of the players stood out to always give the extra pass in search of the teammate with more options to take a shot without marking and high chances of success. He was right, during the press conference after the second game, to feel proud about a statistic: assists.

Venezuela finished the series with 33 assists, an average of 16,5 per game, with Cubillán and "Joya" Garly Sojo as top passers to score with 7 and six respectively. For his part, Sojo was the most efficient player on the court with his contribution on both sides of the court, scoring, rebounding, assisting and stealing balls with an average of 16.

The bank was noticed

It is also to highlight the firmness and the contribution of the players coming from the bench. Sojo exhibited his exceptional athleticism to take rebounds, remove balls with his long arms and shoot with penetrations to the basket, from medium and long distance.

In the first game the bench contributed 29 points and 25 in the second match. Ten of the 12 players who entered the court in each of the challenges converted at least two points. Which speaks well of the renewal initiated by Duró, giving opportunity to new figures such as Sojo, Materán, Martínez, Ascanio or Cisneros, who joined the already established Cubillán, Graterol, Chourio, Zamora and Contreras.

Something that the selection did miss in this first World Cup presentation was the presence of another driver to help Cubillán lower the ball and set up the offenses. The untimely muscular injury of Heissler Guillent with Guaiqueríes prevented Duró from having another point guard with a great reading of the game to enable his teammates and score fantastic triples.

The next window will be more demand for Venezuela. On Friday, February 25 and Saturday, February 26, next year, he will face the new Argentina of Néstor «Che» García, the former coach of the national team, on the same stage of the Obras Sanitarias gym in Buenos Aires, where Venezuela played against Panama at home. , thanks to the noisy support of the hundred of compatriots who make life in the Buenos Aires city.