Former Vinotinto coach, Rafael Dudamel, began his process as a technician at the University of Chile on Friday. He conducted his first practice of integrating in person to the preparatory work for his first official test as a strategist for the "Romantic Traveler" this Sunday against Everton.

At the age of XNUMX, Dudamel takes on one of the most important challenges of his career, which already adds steps by Estudiantes de Mérida (XNUMX), Deportivo Lara (XNUMX) and Atlético Mineiro (XNUMX), as well as processes with the absolute national team, Sub XNUMX and Sub XNUMX.

Precisely with the vinotinto he registers his greatest achievements and that have allowed him to earn international recognition. With the U-17 category he achieved a historic second place in the South American category (2013, Argentina), while commanding the U-20 he shone at the World Cup in South Korea (2017) obtaining an unprecedented runner-up, falling in the final with England.

Thanks to an outstanding career as a player (goalkeeper), which until today has him considered among the most important footballers in the history of the country, the Yaracuyan pilot managed to forge great character, discipline, rigor and a winning mentality.

A methodical style, his search to generate dynamic teams, which are well positioned defensively and are aggressive in recovery, in addition to his appreciation for young players and knowledge of the club and Chilean football, were key to his choice as coach. 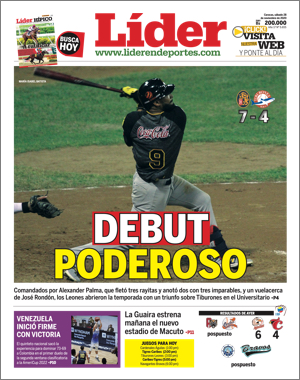